Coronavirus Update: important information from CDDL Recycling: As the Covid-19 pandemic continues to develop around the world our key objectives remain the safety of our people and to provide continuity of service to our customers at this critical time. We continue to follow the government's safety advice. We have strengthened resilience further by adding additional precautionary measures to prevent the spread of the virus and continue to provide you with the best service.

In 2017, when the huge American banking conglomerate was subpoenaed to send over documents and email relating to the case, they accidentally sent over gigabytes of extremely sensitive information that included customer’s names, their Social Security numbers, and their banking history.

The files were handed over with no protective orders, making it technically legal for them to be revealed to the public. Luckily, the lawyer who the documents were turned over to, did the right thing and contacted Wells Fargo to let them know that they had made a mistake.

Had he not done that, approximately 50,000 clients could have had their details revealed as part of public record.

Although the identities of the users were ultimately a secret, anyone who knew what they were looking for could potentially identify someone by searching for themselves, family members or organisations that the person belonged to. This mistake could have potentially put people’s jobs and families at risk.

Sometimes, a very human mistake can put a company at risk, rather than a technological misfire. 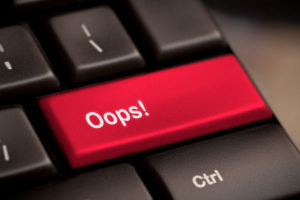 For example, when Home Depot had a laptop reported either missing or stolen, it created a huge security issue for the company. The laptop contained sensitive information for almost 10,000 employees and now it was in the hands of someone that could potentially use that information with bad intent.

Although the case was ultimately put to rest with no damaging consequences, the reputation of the company itself was almost irretrievable.

For more information about how to protect your confidential documents, you can get in touch with the Confidential Document Destruction team today by giving us a call on 01795 874241 or via our contact page.

We use cookies to ensure that we give you the best experience on our website. By continuing to use this site we will assume that you consent.Ok